Other things that involve bamboo

When leaves fully mature in the winter, are the variegated parts colored yellow, not cream white?
The two seedlings I have, start leaves as lime green and then the variegation appears, chlorophyll seems to migrate somehow into darker part of the leaf and the variegation becomes light yellow. Strange fellas

more of a lime color almost yellow with very faint variegation. sadly I moved and left it because I did not think it would grow here
Jason Floyd
Hangtown Farms

It started! The shoots are generally larger and there seems to be a lot of them. Seedling that was performing best last year is on overdrive this year as well.

Well, shooting is under way and branching-out is right behind the corner. While digging around the variegated bamboo this spring, I severed a small part of rhizome of the strongly variegated seedling and placed it into a large pot. I hoped it will start growing. It did. I now hope some of the buds will turn into rhizomes, there should be at least 4 nodes underground, so the chance is more than good..
http://cold-hardy.com
Top 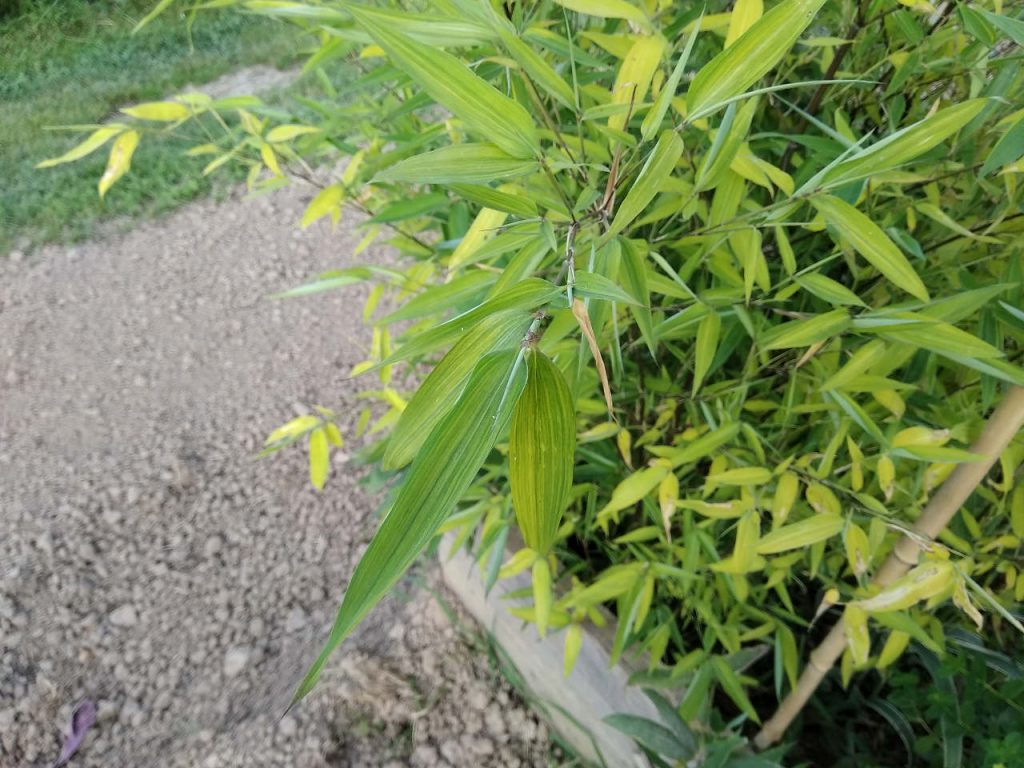 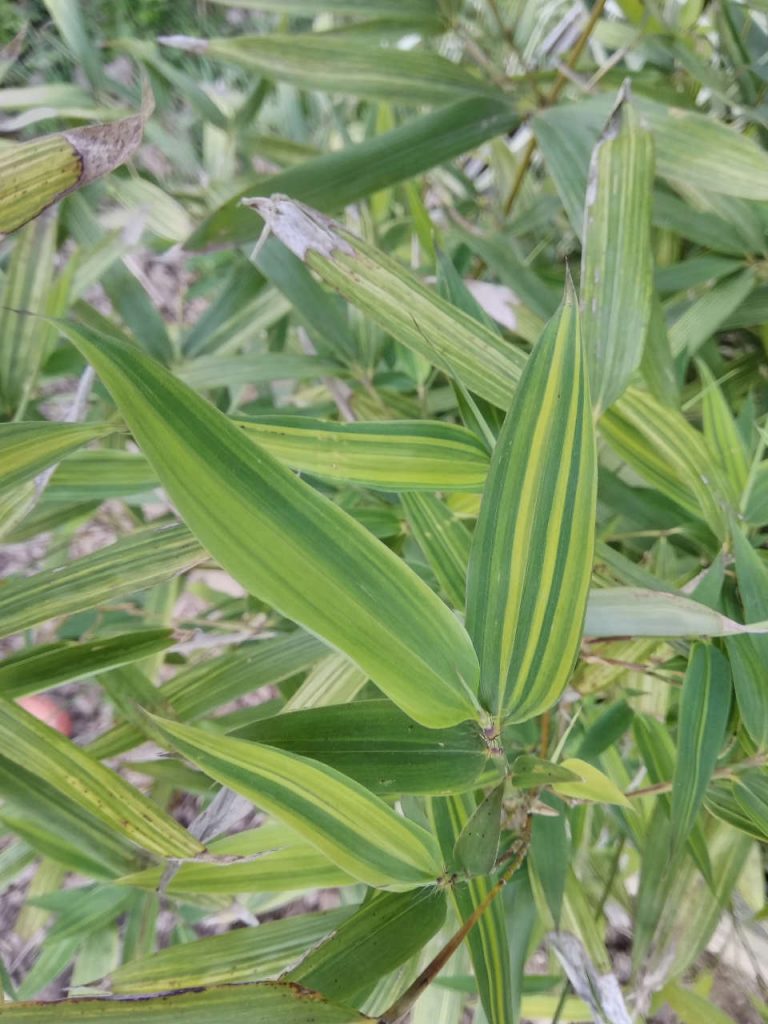 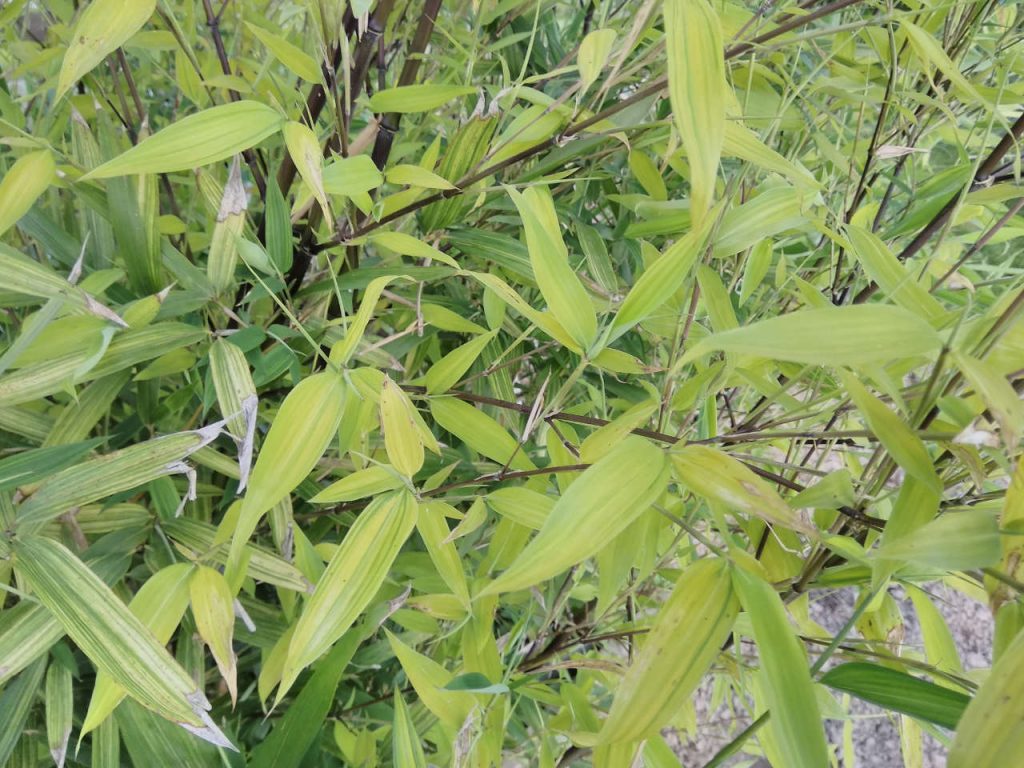 Anyway. The seedlings are now very active. The shooting is over and the new growth is leafed-out completely. The first set of leaves on 2 of the variegated seedlings is almost completely yellow, like always, so it's going to suffer for a while under hot and bright summer sun. There are first signs of leaf damage already apparent. I wonder if growing them in dappled light or complete shade would preserve the first leaves.
I made a small division earlier this year and it took off and leafed-out. It soon perished because it couldn't get any photosynthesis done in time to fill up the used reserves. Cloning it using rhizome divisions will be tricky, I'll have to keep at least one mature culm with it.

Photos can't really tell how bright the leaves are. When it's sun lit, it glows. Especially in contrast with the non-variegated seedling next to it.
http://cold-hardy.com
Top

I have a young D latiflorus that sustained serious cold damage last winter but did not top kill. Once it started to releaf all of the leaves were heavy with cream and cream striping - you'd think it was a named variegated form. But now that it has recovered all the newest leaves are again a solid green and the new shoot is starting to leaf out and show no variegation.

I don't think it is just a juvenile stage thing as pre-winter the leaves were solid green. Perhaps something chemical going on (or not going on) relative to stress in these cases?
Brad Salmon, zone 12B Kea'au, HI
http://www.needmorebamboo.com
Top

Same thing was evident when I grew it inside. First leaves were practically white, then each new leaf gained a bit more chlorophyll. At some point new leaves got almost fully green. At super juvenile seedling stage, while it didn't wait for the spring to shoot, new growth was pale from beginning and darkened following the same pattern.

During the winter, it didn't suffer at all. Most if not all the leaves were in the same condition as they were in the autumn and all the seedlings upsized considerably. Considering how pale the seedlings are, any upsize is fantastic achievement

This year I noticed more culm variegation. It is following the same pattern - looks like chlorophyll would migrate from pale part and concentrate in the dark green stripes. Same is happening in leaves. I'll post two photos as an example a bit later. Yellow becomes cream white and lime green becomes darker.
All three seedlings are showing similar variegation, only difference is - one seems to be chimeric and the amount of variegation (albinism) is different.

Regarding the cause.. It is strange as the new growth is darker on old culms. I think HT 'Shiroshima' also turns darker green during the year. Could be related to similar if not the same mechanism.
http://cold-hardy.com
Top

Picture from like a month ago. Note the lime green parts of the leave with the variegation. Dark stripes are not as dark as they get later.

Photo from a few days ago. Yellow parts of the leaves became cream white, dark striping further darkened. New leaves started growing and there's even an almost completely white branch. It started after the appearance of the larger nicely variegated leaves on both photos.

Here are bunch of photos from this year. Seedlings are getting more and more mature. Now I can see how they'll develop further.

It seems that culms of one of the seedlings are very variegated. They are yellow with green sulcus and random dark green striping.
https://cold-hardy.com/phyllostachys-ar ... oloration/
http://cold-hardy.com
Top

Looks great! You might have a real winner there! I'm learning to live with the mites here, I don't think that I could stop them if I tried!
Brad Salmon, zone 12B Kea'au, HI
http://www.needmorebamboo.com
Top

Mites are everywhere, I my bamboos have got them from birds that visit the canopy, because I haven't bought any bamboo especially not infected with bamboo mites. It is interesting that Spectabilis on contrary, has almost no mites on it. It was heavily infected a few years ago. I hope there is some sort of mite predation going on in there. P. arcana seedlings are located a bit away. They are also under much more heat and drought stress.

My observation here is that they seem to really like some bamboo and others might show little to no signs.
Brad Salmon, zone 12B Kea'au, HI
http://www.needmorebamboo.com
Top
Post Reply
74 posts